Hey everyone! Today I’m going to share my top-secret recipe for the best tasting gluten-free taco seasoning mix. This stuff is seriously delicious, and you won’t believe how easy it is to make. So go ahead and give it a try – your taste buds (and stomach) will thank you! 🙂

Making large batch taco seasoning from scratch is not only economical and easy on your budget, but it’s also a great way to control the flavor and sodium content. But for me, it is essential. I recently started having incredibly vicious migraines and after almost 2 years of near-constant suffering and finally figured out that gluten is my migraine trigger. <insert super sad face here>

It came on quite all of a sudden as I’ve been eating gluten all my life. Pasta, bread, donuts – all of that yummy gluteny goodness. I don’t get any other side effects aside from long-term migraines, but sadly even the smallest amount hiding in soy sauce will now induce 3 days of absolute misery.

So I’ve had to really start paying attention to everything I buy and use. Thus this recipe was born – because, I mean, there are two things I can’t live without – my vegetable garden and tacos. And this taco seasoning is just as good (if not better) than any I’ve ever bought from the store.

When it comes to taco seasoning, you really can’t beat the flavor of homemade. Store-bought taco seasoning packets are often loaded with salt, preservatives, and fillers – yuck. This big batch taco seasoning recipe is gluten-free, and you can make it as mild or spicy as you like. Plus, it’s super easy to make and only takes about five minutes to whip up!

What is taco seasoning made of?

Taco seasoning is a blend of dried herbs and spices that are commonly used in Mexican cuisine. The most common taco seasoning ingredients include chili powder, cumin, garlic powder, paprika, and salt. Some recipes also call for onion powder, oregano, and black pepper.

Best of all, you probably have most, if not all, of these spices in your pantry already. And if not, they’re easy to find and relatively inexpensive.

Gluten is a protein found in wheat, rye, and barley. It’s what gives bread its chewy texture and helps it to rise. Gluten is also used as a food additive in many processed foods.

When people with celiac disease or non-celiac gluten sensitivity eat gluten, it can damage the lining of their small intestine. This can lead to nutrient deficiencies, gastrointestinal issues, and other health problems.

Some people avoid eating gluten as a personal choice, even though they don’t have any gluten-related health issues. This is often referred to as a gluten-free diet.

And in some people, like myself, gluten can trigger migraines.

The answer to this question is maybe. Many store-bought taco seasonings do not contain outright gluten ingredients, however, some brands may use gluten-containing wheat flour or yeast extract as a thickener or preservative.

Since wheat contains gluten, and we know yeast extract is made from barley, both of these ingredients are not considered gluten-free.

Yes! This large batch taco seasoning recipe is naturally gluten-free and does not include any ingredients that contain gluten.

Can I make this spicy or mild?

Can I make this low sodium?

Yes! You can easily make this taco seasoning low sodium by reducing or omitting the salt or using a salt alternative. You could also use water or a low sodium broth when making your taco meat.

No, technically this taco seasoning will not go bad or expire. However, over time the individual spices may start to lose their potency and flavor. For the most flavorful and best results, it is recommended that you use your homemade taco seasoning within two years of making.

How much bulk taco seasoning per pound of meat?

The usual recommendation is 2 tablespoons, but I’m a huge fan of lots of flavor and spice so I use 3 tablespoons of taco seasoning per pound of meat. This recipe makes approximately 2 cups of bulk taco seasoning mix. There are 16 tablespoons in a cup, so it will season about 10-16 pounds of taco meat.

How to use bulk taco seasoning mix

There are many ways you can use this taco seasoning recipe! The most obvious way is to use it as a taco meat seasoning.

When you are ready to make tacos:

Alternative ways to use taco seasoning

There are so many ways you can use taco seasoning! Here are a few of my favorites:

How to make a homemade taco seasoning mix

To make this taco seasoning mix recipe, you will need:

Simply mix all of the ingredients together in a small bowl and store in an airtight container.

When you’re ready to use it, simply add two tablespoons of taco seasoning per pound of meat. Feel free to use more or less depending on your preferences.

Brown the meat, drain the fat, and add the taco seasoning along with about a third cup of water. Simmer until the liquid has absorbed and the taco meat has thickened, about two minutes. And that’s it!

So why in the world am I talking about how to make your own taco seasoning on a gardening site? Because you can grow a lot of the basic ingredients found in most Mexican recipes in a basic vegetable garden – tomato, onion, garlic, cilantro, hot peppers, avocado, potato, lettuce, beans, corn, lime, mango and lemon. I love being able to make fresh salsa from 100% my garden whenever I feel like it 🙂

So what else can you make from your new taco seasoning plus vegetable garden? Here are some ideas:

Cut sweet potatoes in half lengthwise and roast in a 400 degree oven until tender, about 25 minutes. Scoop out the flesh, leaving a ½” border, and mix with taco meat. Top with shredded cheese, diced tomatoes, avocado, and sour cream.

Spread refried beans or taco sauce over a pre-made pizza crust. Top with taco meat, shredded cheese, and your favorite pizza toppings. Bake at 400 degrees until the cheese is melted and bubbly.

There you have it! An easy and delicious big batch taco seasoning recipe that is sure to please everyone at your next taco night. And don’t forget, this taco seasoning mix also makes a great gift for your favorite foodie friends. Simply place it in a cute jar with a bow and they’ll be set for their next Mexican-inspired meal. Buen provecho! When it comes to taco seasoning, you really can't beat the flavor of homemade. Store-bought taco seasoning packets are often loaded with salt, preservatives, and fillers – yuck. This big batch taco seasoning recipe is gluten-free, and you can make it as mild or spicy as you like. Plus, it's super easy to make and only takes about five minutes to whip up!
Print Recipe Pin Recipe
Prep Time 5 mins
Total Time 5 mins
Course Condiment
Cuisine Mexican
Servings 32 TBSP 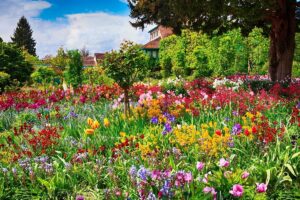 How To Easily Grow and Harvest Garlic

How to Propagate Succulent Plants